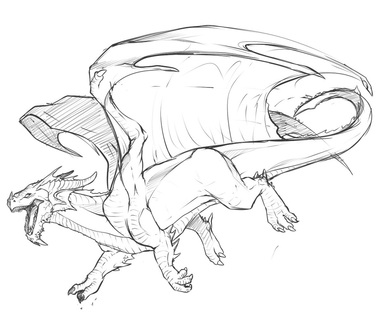 ​The dragons are a proud, regal, and long lived species that were once called “Guardians”. Generally, they are kind, gentle, and wise, and it takes a great deal to provoke them to rage. Because of their peaceful natures, in days of old they were often employed to settle large scale conflicts, judge difficult matters, and officiate peace treaties.

They were once a common sight in the skies, though they did not often mingle with humans and other races. They kept mostly to themselves, within the dragon clans, unless called upon for some important matter. The dragons did this, not because they did not want to socialize, but because they believed that living among the humans could cause large scale problems over time. In the future, though, only the opposite proved true.

Dragons sometimes suffer from a rare illness call “Feralism” which varies in severity. Most dragons that suffer from Feralism are simply dumb and lacking in intelligence, being more of a danger to themselves than others. But, in extreme cases of Feralism, the dragon can be out of control, easily provoked, and bloodthirsty. Mild feralism can usually be detected as soon as a dragon hatches. Severe feralism, however, usually appears later in life. In either case, the dragon clans feel duty bound to remove dragons with Feralism from the skies, for the safety of humans, dragons, and other races alike. Dragons with mild Feralism are usually grounded, their wings clipped. Those with severe Feralism, however, are usually captured and put to sleep.

The dragons identified themselves by the clans they were born into, though it was not uncommon for them to join another clan or start one of their own. There were many dragon clans, but there were seven prominent ones, known as the foundation clans. They were White Sea, Invisible Shield, Iron Bones, Golden Eye, Risen Fire, Dark Sand, and Loyal Star.
White Sea was known for their strong, wise judges and leaders. Loyal Star had several high flying, fast dragons who served as messengers. Invisible Shield and Golden Eye had several dragons well known for their skills in diplomacy. Iron Bones and Risen Fire were filled with dragons who had made their names as warriors and explorers. Dark Sand was the most diverse and the largest clan, and many of the dragons there were watchers and informants for the other clans.
Pharrgon hails from none other than Golden Eye.

This is an old lullaby that all dragons know. It is sang to them when they are hatchlings and they learn it by heart so that they may sing it to their offspring. None know who created it, or what it's purpose was. Most assume that it is a song the stars sing to beckon the dragons to come to them.